Sport under control: To be clear, the…

Good night Raleigh | A view of the city’s art, architecture, history and people at night

Back in May, we presented a mini-series of postcards with the seven government buildings that surround Capitol Square. This week’s Flashback Friday postcard is the second in the series – the State Administration Building, built in 1913. It is now known as the Ruffin Building and is home to the North Carolina Court of Appeals. 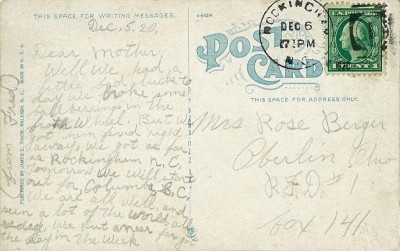 Traveling long distances by car must have been an arduous feat in the early days, as ‘Fred’ indicates in this 1920 message to ‘Mother’.

December 5th ’20
Dear mother
Well, we had a little bit of bad luck today. We broke a couple of ball rings [sic] by doing [illegible] Rad. But we fixed it right away. We got as far as Rockingham, NC. Tomorrow we’re leaving for Columbia, SC. We’re all fine and we’ve seen a lot of the world. We set off near Fargot [sic]The day of the week.
(from Fred)

In my own experience, an extended road trip can certainly create a feeling of “wasted” time – I wonder where in the world Fred et al. were on their way, and if they got there at all!

An architectural masterpiece of the early 20th century

The architectural style combines Beaux Arts classicism with the characteristics of the Second Renaissance Revival. The building is made of reinforced concrete and masonry and is clad in Indiana limestone with granite cladding. Frank B. Simpson of Raleigh was the lead architect on site. 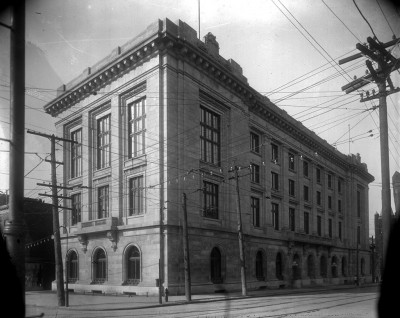 Above is the new administration building as it appeared in 1914. The elegant courtroom took up the space behind the tall windows seen here on the third floor. Below is a section with street level granite details. 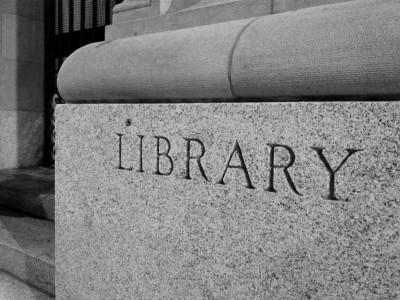 Marye made several contributions to Raleigh’s architectural integrity in the early 20th century. He also designed Raleigh’s City Hall and Auditorium (1910), the Commercial National Bank (1912), and the Wake County Courthouse (1915), all of which, unfortunately, are now lost.

A bronze statue of former Chief Justice Thomas Ruffin (from 1833 to 1852) was commissioned by the legislature and placed in a niche in the entrance loggia on Morgan Street in 1915. It was designed by the New York sculptor Francis H. Packer also designed the statue of the Spanish-American war hero Worth Bagley, which was erected in Capitol Square in 1907. 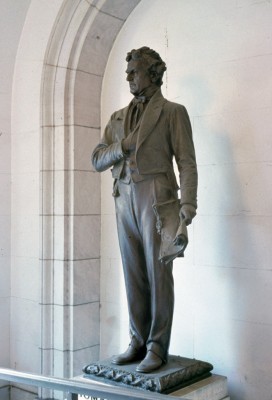 In 1940, the NC State Supreme Court moved to the new Justice Building, located across from what was formerly Fayetteville Street. The former administration building was later renamed the Ruffin building.

After the legal challenges are denied, Michael…

The State Court of Appeals, North Carolina’s second highest court, stayed in the old building. In the late 1940s and early 1950s, the State Art Society, forerunner of the North Carolina Museum of Art, used the vast interior space as an exhibition hall.

An exhibition with Bard photographs and Currier and Ives prints shared the space in the Ruffin building in 1949.

A major renovation and restoration

After decades of changes and harmless neglect, the building was extensively renovated for 18 months in 2008 and 2009. Chief Justice John C. Martin noted that “The aim from the start has been to marry the historic features of this beautiful old building with the efficiency and utility of a modern office building. “

Although Mayre’s original monumental staircase was removed, it was replaced with a new grand staircase lit by a skylight four floors above the lobby level.

An aesthetic highlight of the renovation was the careful restoration of the original courtroom on the third floor. The plaster ceiling was restored by an internationally recognized subcontractor whose experience included restoration work at Buckingham Palace.

The Ruffin building was inaugurated in January 2010.

The photo below shows the beautifully restored courtroom on the third floor. 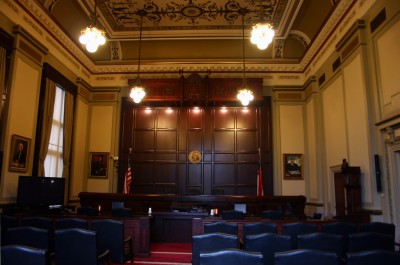 The photos below show details of the intricate workmanship of the courtroom’s painted plaster ceilings. 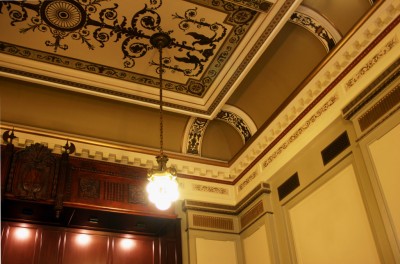 The Ruffin building is open for tours when the court is not present. To tour the restored courtroom and learn more about the renovation of the building, contact Court Marshall Dick Ellis at 919.831.3601 [email protected] 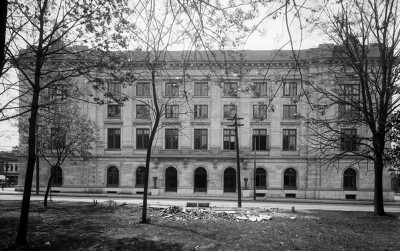 This photo shows the new administration building in 1914. I wonder if GNR readers can identify the masonry structure shown in the foreground in Capitol Square.

A major publisher and printer. Their US factories had more cards than any other printer. They published a wide variety of national sight maps of America and Canada. Many consider her one of the best manufacturers of white border cards. The linen-type postcard was born from their innovations when they pioneered the use of offset lithography. They were purchased in 1974 by Regensteiner Publishers, who printed maps at the Chicago plant until 1978.

“Flashback Friday” is a weekly feature from Goodnight, Raleigh! in which we show vintage postcards depicting our historic capital. We wish you a lot of fun on the weekend!

After the legal challenges are denied, Michael Shvo can move the Raleigh Hotel…

Hoffman & Associates plans to refurbish Seaboard Station in Raleigh for $ 300…